While I wait for my washing at the laundrette to finish I thought I'd pop over to my local internet cafe and quickly jot down some thoughts on this year.

I think it's been surreal this year. The number one stories dominating the news this year were either about a missing girl in Portugal, or a man missing in a canoe. We like drama, sex, drugs and rock' n roll and that's why Amy Winehouse has had such a fantastic year, although tragically she seems weeks away from the publicity killing her.

We watched as Facebook dominated the world even though it still continues to grow, if I were Mark Zuckerberg I would sell up fast before it becomes the next Myspace.

PR struggled this year in my opinion. Bite PR got the Facebook account, successfully proving that something that has become so successful without PR, is now preparing for a dark era where expert help will be needed to keep the advertisers interested.

My favorite PR this year has to be - Richard Branson flying in at the scene of the Virgin train crash. Pure genus and pure Branson. I remember watching it live and he stood there and defended his trains, the heroic driver and Virgin. I distinctly remember thinking that I had no quarrels getting on a train of any description afterwards, and that certainly Virgin was still safe.

My PR low was the amount of coverage the Simpson's Movie got. The PR stunt was to draw a picture of Homer in a cliff edge, not very moving, didn't get me thinking about the movie, and it just left me thinking how much money wasted, and the limits the PR team imagination stretched too when offered such a large scale budget.

What next? Google will retain the crown, no doubt with the demand for mobile media to go global. The iPhone was slick, but I see Google doing something truly different and far superior. Too sum up, which I don't think could have been done better than Jeff Jarvis - "This may have been Facebook's year. But so far, it is still Google's century."
Posted by Patrick Doyle at 05:36 1 comment:

I found myself in a very interesting conversation the other day whilst manning my bar that I work in. A man called Simon Filler who is a freelancer who's roles include, Head of Marketing for Arc Inspirations and a few other companies based in London. He sat down on his own, I recommended him with a drink and he sat down at the bar and we started to chat. Soon after we were in that typical debate about PR being part of the marketing mix and the limits with PR according to the greater scheme of things.

I was surprised to the level to which I was standing up for PR, maybe I'm really getting stuck into it. I even silenced him once or twice with points about product placement being advertising, to which he thought was PR. Then his friend arrived sat down cottoned on to what we were talking about and laughed. Simon looked at him at they both started to laugh, seems they were surprised to be going out to a bar and finding a bar tender who new a thing or two about their profession. The other guy, forgive me I didn't get his name, was high up in marketing for the NHS.

The debate thickened mostly around product placement, the wider marketing mix and the role PR has in the modern world. Apparently PR is dying. Anyway there isn't any real ending to this post, except to say that I finally feel like I've grown up a bit, and that these academics and practitioners aren't as scary as first thought. We all have views that have validity and it doesn't matter how much experience someone has there is always something to learn from another.
Posted by Patrick Doyle at 05:38 3 comments:

Fizzy and new, or old and Flat

Pepsi have now joined facebook. They pay to advertise their product on a profile where others can become "fans" of the product. This then shows up on the profile of the "fan" showing the world that they are indeed a little bit partial to a bit of cola.

Along with a few thousand companies so far, Pepsi have decided that there is just cause to pay for this honour to be on facebook. I don’t see why.

I was brought to this by an article in Broadcast magazine which I was flicking through whilst at a music video the other day, and even became a "fan" of Pepsi just so I could officially write on the wall, which went a little something like.....

"Using facebook as some sort of advertising platform is very silly. People don’t really care about these pages, they aren't secure, impossible to monitor its effects and are open to criticism. You spend millions elsewhere and for the person who set this up, I would advise you think carefully how you use this particular media."

Am I right? Is this the cheapest if not tackiest form of product placement?

What ever the components of this equation of advertising or however you wish to classify this form of communication are, the answer will always be the same.

TIMES the amount of companies who think this media is worth communicating through ?,???,???'s

EQUALS - Mark's early retirement comes even earlier, and the next 1.6 percent goes for twice as much.
Posted by Patrick Doyle at 08:45 2 comments:

I happened to stumble across a very interesting poster at uni the other day advertising a guest lecture featuring Anne Gregory entitled "PR ands its struggle for credibility".

Interesting as PR students we weren't told about this directly, personally I would have loved to have gone. Maybe we are not been invited in case we would not enjoy the content, it seems to me that we spend a lot of time listening to why advertising is "dying" and marketing is similar but not as "dependable" or "efficient" as PR, we should be able to view all aspects of what we study otherwise we will become even more naive and ill mannered in our ways towards "rival" disciplines.

Fight night PR vs Marketing vs Advertising now that sounds like a plan. I can already imagine the mayhem. HA!
Posted by Patrick Doyle at 08:55 2 comments: 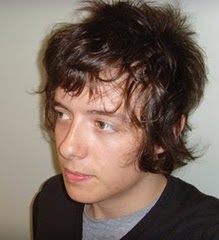 Keep in the Loop